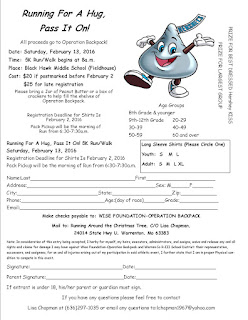 Attached is a flyer for a Fun Run/Walk called "Running  for a Hug" that will take place on Saturday, February 13 at 8am.  It will begin at the Blackhawk Middle School Fieldhouse.

All proceeds go to "Operation Backpack" which is an organization that fills the backpacks of kids in need with food to bring home on the weekends.

Fill out the form and send it in along with your check to the address on the form.  (Or just give it to Lisa Chapman when you see her.)

You're also asked to bring a jar of peanut butter or box of crackers on the day of the race.

DEVOTION  Luke 4:16-30
16 And he came to Nazareth, where he had been brought up. And as was his custom, he went to the synagogue on the Sabbath day, and he stood up to read. 17 And the scroll of the prophet Isaiah was given to him. He unrolled the scroll and found the place where it was written,

18 "The Spirit of the Lord is upon me,
because he has anointed me
to proclaim good news to the poor.
He has sent me to proclaim liberty to the captives
and recovering of sight to the blind,
to set at liberty those who are oppressed,
19 to proclaim the year of the Lord's favor."

20 And he rolled up the scroll and gave it back to the attendant and sat down.And the eyes of all in the synagogue were fixed on him. 21 And he began to say to them, "Today this Scripture has been fulfilled in your hearing." 22 And all spoke well of him and marveled at the gracious words that were coming from his mouth. And they said, "Is not this Joseph's son?" 23 And he said to them, "Doubtless you will quote to me this proverb, 'Physician, heal yourself.' What we have heard you did at Capernaum, do here in your hometown as well." 24 And he said, "Truly, I say to you, no prophet is acceptable in his hometown. 25 But in truth, I tell you, there were many widows in Israel in the days of Elijah, when the heavens were shut up three years and six months, and a great famine came over all the land, 26 and Elijah was sent to none of them but only to Zarephath, in the land of Sidon, to a woman who was a widow. 27 And there were many lepers[a] in Israel in the time of the prophet Elisha, and none of them was cleansed, but only Naaman the Syrian." 28 When they heard these things, all in the synagogue were filled with wrath. 29 And they rose up and drove him out of the town and brought him to the brow of the hill on which their town was built, so that they could throw him down the cliff. 30 But passing through their midst, he went away.

The word "fickle" means "changing frequently especially as it regards one's loyalties interests, or affections.  As you read the passage above, were you as struck by the fickleness of the people in Nazareth as I was?

At first they were happy to see him.  Here was this hometown boy who made something good out of his life.  As he read the passage, they were all so very proud of him.  They had also heard that he had done miracles all over the place, so they couldn't wait for him to do some in his hometown as well.  Surely he would do some great things.

That's when things took a drastic turn.  Jesus doesn't tell them what they want to hear.  In fact, he tells them that there won't be any miracles done there in Nazareth.  Instead, he is going to be going to the Gentiles.  To the people in Nazareth, this was the most offensive thing he could say and do.  They got so mad at him, that he would rather spend time with the Gentiles and foreigners than the people of his hometown, that they started a riot and were about to when Jesus, and I don't know how he really did it, but it said he passed through their midst and got away.

The feelings of the people about Jesus went from pure pride and joy to wrath and disappointment in an instant simply because Jesus said something they didn't want to hear.

How fickle are you when it comes to Jesus, faith, and the church?  If I were to say something you didn't like, even if it were true and you needed to hear it, would you leave the church?

The law doesn't feel good when it hits us between the eyes.  Our first reaction to someone telling us that we're doing something wrong is probably not going to be favorable.  Yet, can we or should we hate someone when they tell us the truth even when it hurts?

You're gonna have to come to church this weekend to get the rest of this message.

Let us pray: Lord, help me to take you at your word, and help me to appreciate those who preach and speak your word to me, even when it hurts.  Help me to trust and have faith in all of you and not just the things that I like about you.  Amen.

This answer comes from Denise Schlesselmann all the way in the Czech Republic.

So the answer to the question is that Shechem the Hivite saw Dinah while she was visiting the Hivite women. Dinah is the oft forgoten sibling of Joseph and his brothers. Shechem was the son of the ruler. Shechem decided Dinah was the girl for him but instead of first asking his dad to get the girl for him he "took her and violated her". But then he really fell in love with her and spoke tenderly to her. So now he asked his dad to get Dinah to be his wife. Hamor, Shechem's dad went to Jacob while his sons were there and told him "My son loves your daughter, let's have them get married. Then your sons can marry our daughters. You can live in our land." Shechem chimes in "I will pay any price I just want the girl!" Jacobs sons said "Okay but only if you get circumcised." Hamor and his sons said "Okay." They convinced all the men in the city to be circumcised so that they could marry into Jacob's family and the men could get their property too. 3 days after the circumcision Simeon and Levi went to the city and killed every man. The took Dinah back too. Then they took all their property, wives and children. Jacob was angry because he knew all the people where they lived were angry with Jacob's family. But the brothers said they were only defending their sister. It was after this that God told Jacob to leave and gave him the name of Israel