Buds, Blooms, and Thorns Review of Pluto Attacks! by JTP Games
DisclaimerSupport me on Patreon! 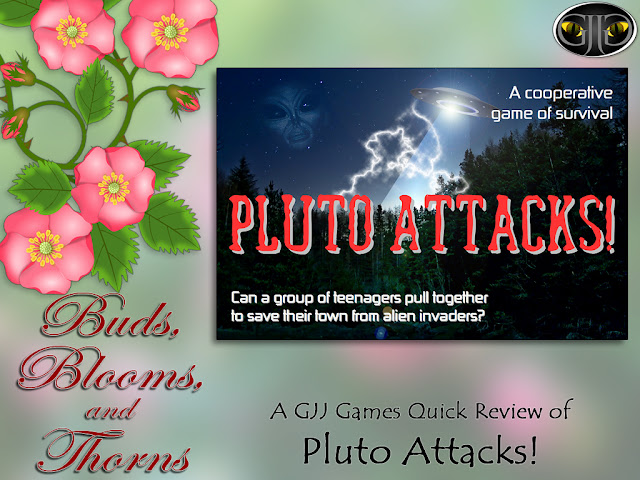 Introduction:
What's better than a black and white, 1950's b-level sci-fi movie?  Well, lots of things, but they are fun to watch.  Pluto Attacks! lets you play through a classic sci-fi movie where aliens from Pluto are attacking a small town in 1954.  As is the case in these situations, all the adults have been incapacitated so it falls to a group of teens to save the day.

Pluto Attacks! is a cooperative dice game for 1-6 players.  You'll get to take on the role of a teenager in the small town working with your teammates to defeat the aliens before the end of the movie.  The game plays through four acts with a new scene appearing every turn.  Using skills and abilities you'll have to roll dice to match requirements for each scene to secure the location.  Securing the location gives you certain abilities, but may also be required to resolve the final obstacles.

Blooms:
Blooms are the game's highlights and features.  Elements that are exceptional.
Buds:
Buds are interesting parts of the game I would like to explore more.
Thorns:
Thorns are a game's shortcomings and any issues I feel are noteworthy.
Final Thoughts:
I first played Pluto Attacks! at Protospiel Chicago in 2016 and again at Protospiel Milwaukee in 2017.  It's made the rounds to quire a few other Protospiel events as well.  I've since played my copy a few times, too, and have enjoyed every game I've played.  Over the years the game has gotten better since my first play, too, with more cooperation opportunities available, improved artwork, and some refined mechanics.  I do wish the cooperation aspect was pushed a bit more and that there was a little more control and luck mitigation, but the game as it currently plays is fast, fun, and easy to explain.  It's a great game to pull out as a filler or with more casual gamers.  I really like the sense of progression through the story like you'd have in a movie.  The players are confronted with a series of setbacks, while they try to just survive and the town slowly falls to the invaders.  Then they figure out what they need to do to defeat the aliens and get down to work trying to save the last remaining pieces of the town while collecting what they need to fight off the attack once and for all.

Every game I've played has come right down to the wire, so the balance seems great - no small feat for a game that relies so heavily on lucky dice rolls.  Played right, you'll reach the game's conclusion with enough options for mitigating bad luck in those final dice rolls, hopefully.  When you lose though it's easy to blame bad luck with the dice and cards that happened to come out.  I wish there was something that gave you a little more control, or at least sense of control, especially as the game ramps up.  As a dice game there's no escaping the luck factor, but giving the players a few more possible tools for mitigating the dice would be fun.

Overall though, I really like Pluto Attacks! for a light, casual game.  The theme is fun, the mechanics reflect the theme wonderfully, and it's always a fun time with an exciting end.  This isn't a collection essential, but if you like the idea of this you won't be disappointed. 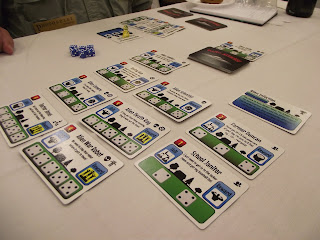 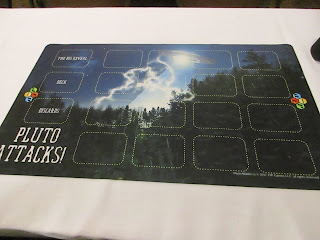 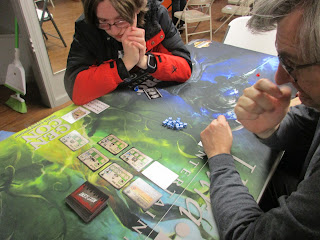 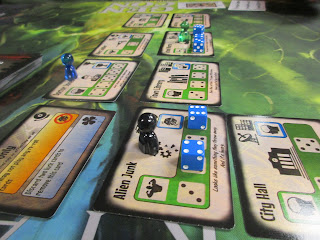 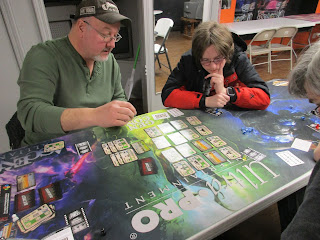 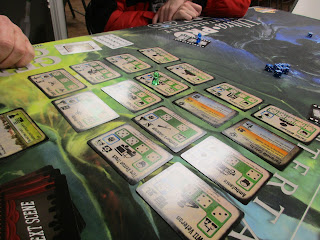 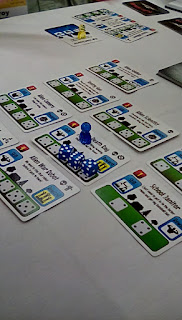 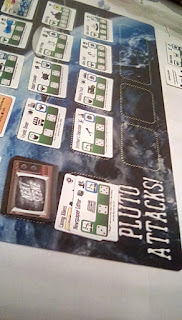 Did you like this review?  Show your support: Support me on Patreon!Also, click the heart at Board Game Links

.  And be sure to check out my games on  Tabletop Generation.
GJJ Games Reviews are independent, unpaid reviews of games I, George Jaros, have played with my family and friends.  Some of these games I own, some are owned by friends, some are borrowed, and some were provided by a publisher or designer for my honest feedback and evaluation.  I make every attempt to be both honest and constructively critical in my reviews, and they are all my opinions.  There are four types of reviews on GJJ Games: Full Reviews feature critical reviews based on a rubric and games receive a rating from 0 to 100.  Quick Reviews and Kickstarter Previews are either shorter reviews of published games or detailed preview reviews of crowdfunding games that will receive a rating from 0 to 10 based on my impressions of the game.  Buds, Blooms,and Thorns reviews are shorter reviews of either published or upcoming games that highlight three aspects of a game: Buds are parts of a game I look forward to exploring more, Blooms are outstanding features of a game, and Thorns are shortcomings of a game.  Each BBT review game will receive an overall rating of Thorn, Bud, or Bloom.